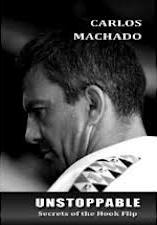 For those of you familiar with Brazilian Jiu-jitsu, you have probably heard of the butterfly guard. Carlos Machado’s Unstoppable hook flip DVD teaches you how to use the butterfly guard position to sweep and get on top of your opponent.

The DVD starts off with Carlos Machado giving you the angle you need to create between you and your opponent in order to get to get the hook flip. Carlos then has 3 of his black belts demonstrate the ways they choose to control the far side arm, to prevent your opponent from basing out and defending your sweep. Once Carlos discusses the angles you need to achieve in order to be successful he then breaks down where you need to apply pressure in order to prevent your opponent from rewinding the position. Carlos is able to point out some extremely helpful details that will save you a lot of headaches, especially since there is nothing more frustrating than going to sweep your opponent and getting crushed instead.

One of the things I really like about this DVD is that Carlos has the ability to articulate exactly what he is doing on the mat. In the chapter titled control Carlos goes back to the initial 3 arm control grips that where discussed in the opening chapter and breaks them down to make them “unstoppable”. Carlos instructs you on exactly how to move your individual body parts to use your body weight and angles to take away your options for defending. Mr. Machado also lets us know when and how to switch between controls.

One of the sections of this DVD I found most helpful was Carlos teaching what do to your opponent won’t allow you to obtain one of the first 3 controls either because he is keeping his arm hidden or because he has his arm planted in such a strong base that it becomes too difficult to move. Carlos teaches what he calls “the cup”. The cup allows Carlos to continue working his hook flip even when his opponent is defending his first 3 attempts to controls and keeping a strong base Carlos does a great job explaining how you should control your opponents body and the direction you should be sweeping him. Carlos then goes on to teach a sweep that does not require you to have control of your opponents arm at all, instead using the head to initiate the flip.

What makes Brazilian Jiu-jitsu so versatile is that people can resist your techniques in any way they want. The butterfly guard is no exception, there are several things people will do to avoid being swept, and Carlos goes over how to systematically deal with each one. Carlos goes in depth on what to do when people try to keep their position by hovering over you  and what to do when people try to stand up to avoid the position.

I think this DVD was a great purchase. It has given me a countless number of details to add to my butterfly guard game and Carlos does a great job of articulating where to keep your body, how to move, and then angles you are trying to attack. The DVD is put together in a way that allows both novice and advanced BJJ players to gain valuable insight into this position.