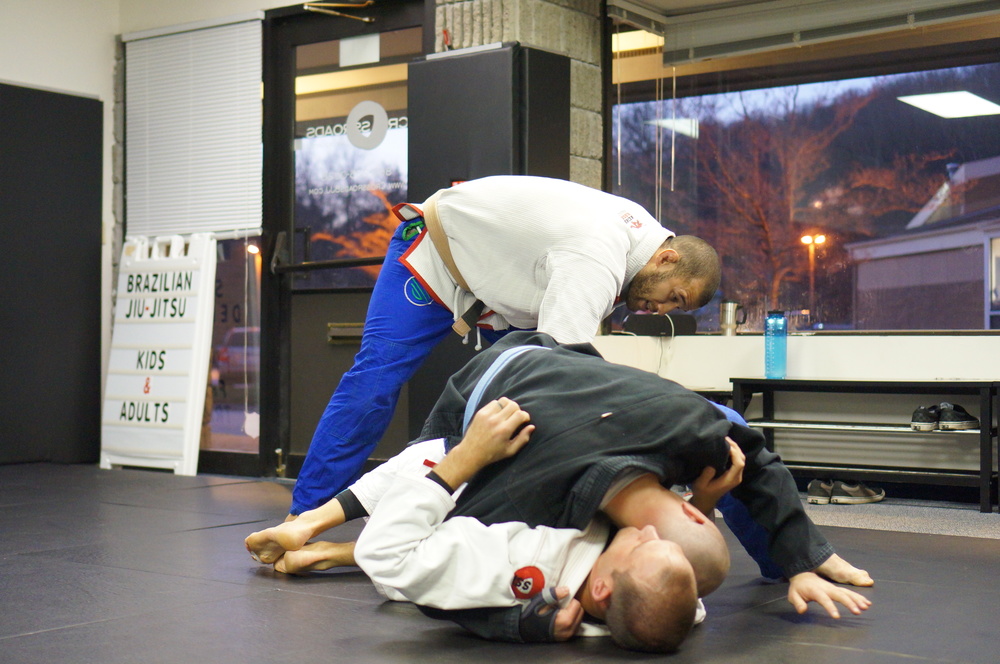 When the voice of experience speaks, it’s usually a good idea to listen. When that voice is talking about jiu-jitsu and has an undefeated professional MMA career as backup evidence, you pay close attention to what it’s saying, because it works! On Saturday, December 5th, Crossroads BJJ was proud to host one such distinguished voice, as Eric “The Dream Catcher” Spicely (8-0 MMA, 6 wins by stoppage) came by and gave an incredible private seminar to everybody in attendance. Eric is a brown belt in Brazilian Jiu-Jitsu under Tim Burrill in Providence, RI (http://www.timburrill.net/) . He has built quite the impressive grappling and MMA resume over the past few years and is looking to make his mark on the worldwide MMA landscape in the near future.
During the seminar, Eric focused on simple, straightforward, techniques that he has found to work effectively in situations we encounter on the mats every training session. From innovative, yet easy to learn guard passes, to shoulder pressure enhancement and general rolling strategy, there was plenty of applicable knowledge being shared and new skills learned.

Eric takes a laid-back and practical approach to grappling, but anyone that has ever rolled with him knows that that doesn’t mean that he’ll give his opponent any leeway when it’s time to compete. And compete he did! As a special bonus after the instructional portion of the seminar was over, Eric stayed and rolled with everyone in attendance who wanted to, running like a hot knife through butter on most, and having some awesome back and forth battles with Dustin. This was Eric’s second seminar at Crossroads, and surely won’t be the last, be sure to check our schedule regularly to find out the next time he’ll be stopping by to share the wealth!