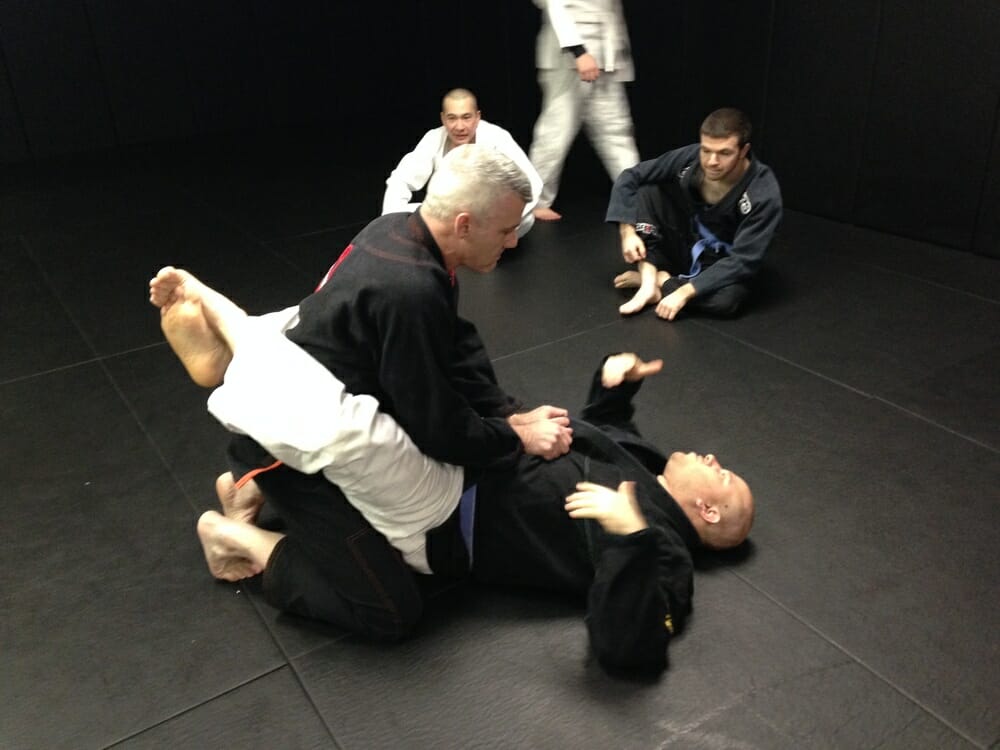 Wednesday nights class Began with Coach Doug walking everybody through how to perform the hip bump sweep from the Guard Position. One of the things that separates BJJ from other Martial arts is the range of techniques it has to defend yourself while you are on your back underneath your training partner. The guard is a very powerful position with a range of techniques designed to move from the bottom position where you are in danger of your opponents punches to the top position where you are out of danger from strikes. The main strategy of BJJ is to keep yourself out of harms way. The second technique of the night was how to counter your opponents defense to your hip bump sweep with a shoulder lock called “the Kimora”.  One of the other main principles of BJJ is that we always want to be as efficient with our energy as possible.
We always have to assume that if we are put into a position where we have to defend ourself against a much larger attacker that our techniques will still work because we are using momentum and leverage. So instead of trying to power through with the hip bump sweep after our opponent has defended it is better to switch to a different move where the attacker is giving us less resistance, in BJJ we call this “Flow”. The great thing bout the hip bump sweep and the Kimora is that you can flow between the two keeping your training parter on the defense while you work to put yourself into the stronger position.

Once we finished the hip bump sweep we landed in the Mount position, one of the strongest positions in Brazilian Jiu-jitsu, from here we practiced the Ezekiel submission hold. The Ezekiel is a great move to neutralize an attacker without actual hurting them. The goal of BJJ is to be able to defend ourselves while doing the least amount of damage to a person as possible while keeping ourselves safe from harm.

We ended the class with a great workout, going right into drills specifically designed to put the new techniques we learned today into our muscle memory. Putting techniques into your muscle memory means that if you ever need to use them, you don’t have to think about the move, you just perform the move. This skill is crucial for truly being able to defend yourself.