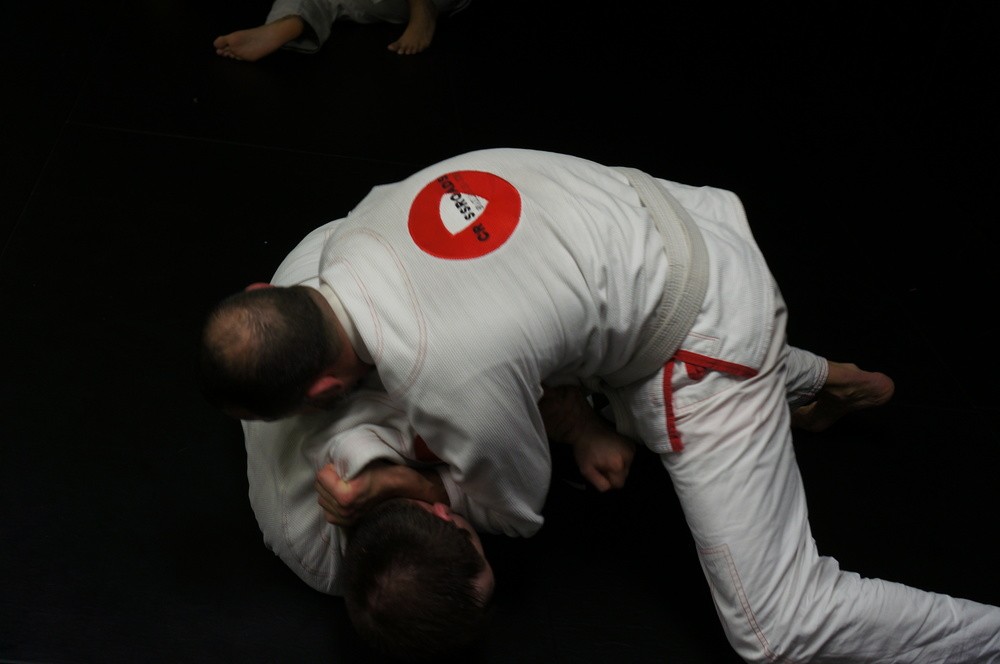 Today during the Brazilian Jiu-jitsu Class at Crossroads BJJ Coach Doug covered the toronado pass. This is one of the most commonly used passes in BJJ and can be seen in pretty much every tournament you will every see. The toronado pass is a loose style pass that is accomplished by controlling your training partners legend then moving them out of the your way to clear a path to either side control or knee on belly. Today’s class covered the concept of flow, moving from one position to the other based on your training partners reactions. The main idea of flow being that instead of using strength to force moves, we will switch to a different move that requires less energy. Flow is what makes sure that it is the other person that gets tired not us.
After the toronado pass Coach Doug taught how to move into the knee on belly position. Knee on belly is great position for self defense, because it allows you to keep the higher ground while using your weight to hold your training partner or a potential attacker down. The position is also good because it allows you to exit the fight easily and quickly. Once everybody understood knee on belly we went into an extremely powerful finish, the baseball bat choke. This choke allows you to attack without attack without giving up position so if your attack fails you are able to follow it up with a secondary attack without losing position. The flow aspect of class came into play when Doug taught the defense and we transitioned into taking the back and finish with a bow and arrow choke from the back mount position. Always looking to improve your position is the name of the game at Crossroads BJJ, implementing one of BJJ’s most commonly taught philosophies “Position Before Submission”.
Dustin Rhodes
Brazilian Jiu-Jitsu Black Belt
Head Instructor of Crossroads Brazilian Jiu-Jitsu
316 Boston Post Road
Waterford, CT